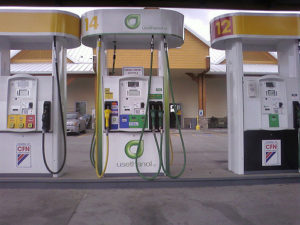 Based on an independent audit, Pacific Biodiesel’s US$20-million, 13,000-gallon-per-day processing plant in Keaau, Hawaii has become the first in the United States to receive a sustainability certification, the Sustainable Biofuel Alliance reported earlier this month.

“The certification is intended to help clean fuel producers distinguish themselves to customers seeking green products—a kind of Good Housekeeping Seal of Approval for the environmentally conscious,” the New York Times reports. “For biofuels, the environmental benefits of which have fallen under increasing scrutiny in recent years, that differentiation is ever more important.”

Clean Air Task Force lawyer Jonathan Lewis expressed the widespread concern that “efforts to ramp up our use of biofuels are actually doing a lot of damage and digging the climate hole deeper.” He added that “it’s a bunch of small economic steps, but if the end result is deforestation of a tropical forest, there’s a massive carbon pulse when you do that.”

Jeff Plowman, chair of the SBA’s certification committee, noted that “there are lots of different ways of making biodiesel—lots of different feedstocks—and some have been more sustainable than others.” That means the certification, “much like the organic labelling or non-GMO labelling…gives consumers some information to make a choice.”

Climate specialists warn that “there may simply not be enough agricultural waste to produce significant quantities of biofuel without causing other environmental problems, and it is important to account for what would have happened to the waste material had it not been funneled into fuel,” the Times reports.

“You can’t just automatically make assumptions that, say, waste-based fuel is okay,” research professor John M. DeCicco of the Michigan Energy Institute told the Times’ Diane Cardwell. “If you have a waste that was otherwise not going to decay, then that carbon is already being kept out of the air with respect to the atmosphere, and at that point you’re as ahead of the game as you’re ever going to be.”