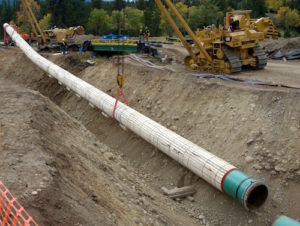 Canada’s National Energy Board gave its blessing to Kinder Morgan’s proposed TransMountain pipeline expansion in a decision released Thursday, even after finding that the controversial project would produce a million tonnes of greenhouse gas emissions each year.

The approval is subject to 157 environmental, financial, and technical conditions. The project will now go into six months of review by a three-member panel appointed earlier this week.

The conditions “include requirements for project engineering and safety, marine shipping, emergency preparedness and response, environmental protection, people, communities, and lands, and financial responsibility,” the National Observer reports. “Overall, 58 of these conditions pertain to the environment, including nine for air quality and greenhouse gas emissions.”

The NEB’s process and the TransMountain project itself have been subject to scathing criticism from B.C. First Nations, declared “fraudulent” by a leading energy executive, and rejected by Burnaby, B.C. Mayor Dennis Corrigan, students at Kwantlen Polytechnic University, and hordes of protesters on Burnaby Mountain. The Board has been criticized for failing to consider the upstream and downstream emissions the project would trigger, or to factor in the findings of a U.S. National Academy of Sciences study that documented the unique physical qualities and environmental risks of diluted bitumen.

“The pipeline expansion has incited fierce opposition, largely because it would bring 400 oil tankers per year through Vancouver’s beautiful harbour, near Stanley Park, into a marine area inhabited by endangered Orca whales,” the Observer reports. “Twenty-one municipalities, including Vancouver, Burnaby, Port Moody, and Victoria vehemently oppose the expansion project, along with 17 First Nations, from the Squamish in B.C. to the Lummi Nation in northern Washington. In 2014, over 120 civilians were arrested on Burnaby Mountain protesting the project.”

But on Thursday, the Energy Board “determined the project would not likely cause significant adverse environmental effects or result in a catastrophic spill, as long as the Texas-based oil giant implements its own environmental procedures, and follows the NEB’s stipulations closely,” the Observer notes.

Rueben George of the Tsleil-Waututh Nation, which is challenging the NEB process in court based on its duty to consult First Nations, said Kinder Morgan had already failed the community’s review process. “Our concerns for the potential negative impact of an oil spill on the local economy and the irreparable damage to our traditional lands and water is simply a risk too great to accept,” he said in a release.

George had previously rejected the appointment of the three-member federal panel that will now begin double-checking the NEB’s work. “That’s their processing,” he said earlier this week. “Our consultation is called nation-to-nation.”

But in the Financial Post, reporter/editor Kevin Libin says the NEB’s decision may carry less weight than it appears. “The approval authority of the NEB was already looking DOA, long before it tabled its ruling, and in no small part because Trudeau had delivered it, too, a good, hard wallop.”