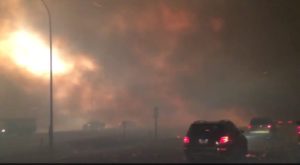 (The digest you received an hour ago contained only one story. This one is unchanged, but the rest of today’s coverage follows.)

One of the threats most clearly identified with climate change in high latitudes—bigger, hotter, earlier forest fires—came home to tens of thousands of households in Canada’s tar sands/oil sands capital Tuesday, as authorities ordered all 80,000 residents of Fort McMurray to evacuate in the face of out-of-control flames.

The full evacuation order came Tuesday at 6:20 PM local time. By then, CBC was reporting that the fire had reached the downtown core, and Fort McMurray’s hospital was evacuating all its patients by bus, critical cases first.

“All of Fort McMurray is now wondering if they will have homes to return to, as the fire that started Sunday quickly overwhelmed firefighters and the city’s resources,” the Edmonton Journal reported last night. As evacuees headed south, they “saw much of their city on fire. The immolation of the Centennial Trailer Park was nearly complete, with the flames stripping all that was flammable off the metal skeletons of mobile homes and vehicles.”

And “tomorrow [is] expected to be a more intense burning day,” according to a Tuesday evening tweet from Global News Calgary, citing Alberta’s assistant deputy minister of forestry.

At 3:38 PM local time, Edmonton journalist Sean Amato tweeted the breaking news that “#ymmfire ‘beyond resources’. Too dangerous to put men & aircraft between fire and #ymm.” (YMM is the aviation code for Fort McMurray.)

“We just had a big wind gust that picked up dust into a twister shape. Shingles flying off houses,” CTV’s Breanna Karstens-Smith tweeted less than an hour later.

“The McMurray Métis office is gone,” tweeted Fort McMurray Today reporter Cullen Bird at 6:16 PM local time. “So is all of Centennial Park. We felt heat of the fire, and smoke meant we couldnt see 20 ft ahead.”

At 6:18 PM, Syncrude asked employees to “hold in your work location until further notice” due to the “rapidly changing fire situation”. Shell Canada said its operations 95 kilometres north of Fort McMurray were unaffected, the  Journal reported. Suncor Energy cut back production at its regional plant 25 kilometres away “to allow employees and their families to get to safety,” the Globe and Mail reported.

The fire started west of the city over the weekend. At one point it appeared that firefighters were gaining control, and some evacuees were allowed to return home. But driven by high winds, the fire leapt across the Athabasca River, which runs past Fort McMurray, igniting a second blaze. City officials said the fire “doubled in size overnight Monday from 1,285 hectares to 2,600,” according to The Weather Network.

By late Tuesday afternoon, 10 neighbourhoods and 30,000 people had received mandatory evacuation orders. A trailer park, evacuated earlier, was on fire, and flames were moving toward a commercial area, Canadian Press reported. CBC News said the municipality was urging evacuees not to risk returning to their homes to retrieve pets.

Highway 63, the main route into and out of Fort McMurray, was reported closed south of the city, after flames were seen on both sides of the highway. “It’s chaos on the roads,” said Carina Van Heerde, identified by CP as a reporter with a local radio station. “People are panicking. It’s gridlock on the roads. Flames are right next to a gas station.”

By late Monday, ash was descending on the city as night fell. “If you just walk outside, you feel it falling on you.” resident Mark Durocher told CP. “You see it floating in the air. You can taste it and feel it when you’re walking around. It feels really heavy and you can taste just how ‘woody’ it is in the air. I can take a broom and brush it off my deck.”

CP attributed the fire to “unseasonably hot temperatures combined with dry conditions” that “transformed the boreal forest in much of Alberta into a tinder box,” with a wildfire threat “ranging from very high to extreme.” By Tuesday evening, the Observer added, “the city temperatures had risen to 30°C and no rain was expected until Wednesday night.” One Vancouver climate communicator reported the local temperature at 31°, at a time of year when there would normally still be ice on the river.

More destructive fire seasons are among the best-documented impacts of rising temperatures, as hotter spring days dry out forest floors earlier in the year and energize lightning storms that can ignite infernos. Last summer, British Columbia Premier Christy Clark blamed climate change for the hundreds of fires burning at the time in her province. Wildfires also triggered the shutdown of operations at several tar sands/oil sands facilities for the first time ever.

2015 smashed records for global heat, scientists said, and the first three months of this year have each set a record for the hottest 30-day period ever recorded.