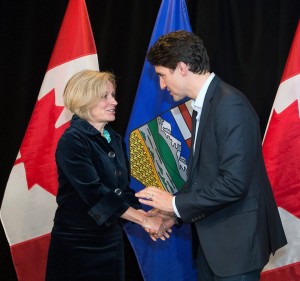 Alberta Premier Rachel Notley said she received a “good hearing” for her argument “that Alberta’s economic health is linked to Canada’s economic health” when she addressed a federal Cabinet retreat in Kananaskis Sunday evening.

Sources told CBC she received a standing ovation for her presentation.

Speaking to reporters following the meeting, Notley “said she offered ministers statistics on the contribution Alberta makes to the national economy, including jobs and the contribution to federal government revenue,” the Globe and Mail reports.

The premier had previously complained that Canada was “acting like a bunch of villages as opposed to a nation” in its handling of the pipeline file. In Kananaskis, she said Canadians need to “collectively understand there is a larger project, that we all need to roll up our sleeves, and one of them is to ensure that as a nation we can establish a level of economic prosperity that supports all of those villages.”

“Building pipelines does not have to mean we are quadrupling our production,” she added. “It allows us the opportunity to choose our markets strategically and get the best price for our product.”

Notley cast pipelines as the safest, most environmentally friendly way to transport oil, and the “only sources of revenue big enough to pay for the transition away from an oil-and-gas economy,” CBC reports. She also updated Cabinet members on the province’s climate plan.

In the end, “there was no clear commitment given to us tonight,” the premier said, but that wasn’t necessarily her goal for the pitch. “I saw today as an opportunity to make Alberta’s case.” Natural Resources Minister Jim Carr said Ottawa wants “to move our natural resources to tidewater sustainability, and we have announced a set of principles that will guide us along that way.”

Ahead of the Cabinet session, a provincial policy-watcher said Notley had a wish list to present to the federal government.

“She wants to know where the infrastructure spending is going in Alberta, she wants to get Edmonton included in the expanded [Employment Insurance coverage], and stuff around pipelines, pipelines, and pipelines,” said Duane Bratt, chair of policy studies at Mount Royal University. While Global News reported “speculation swirling” about Prime Minister Justin Trudeau’s decision to convene in southern Alberta and meet with Notley, Bratt said it made perfect sense.

“Why wouldn’t he?” he asked. “Notley’s a major premier (in) one of the biggest provinces and a province that’s having economic trouble. Why wouldn’t the prime minister be here?”

Last week, the Globe and Mail and other media reported that Notley and British Columbia Christy Clark were working on a deal in which Alberta would buy electricity from B.C.’s Site C hydro project, and B.C. would support development of Enbridge’s Northern Gateway pipeline.

Notley “said in an interview she is no longer unreservedly opposed” to Northern Gateway, “a reversal from her previous position that helps breathe new life into a $6.5-billion project many have written off as dead,” wrote Globe reporter Gary Mason.

“Both the negotiations with B.C. and the change of heart on Northern Gateway represent potentially ground-breaking developments in the debate surrounding Alberta’s, and the country’s, energy future,” he added, driven by the “brutal financial reckoning under way in Ms. Notley’s province as a result of the dramatic drop in world oil prices.”

Following Notley’s remarks, B.C. Environment Minister Mary Polak said the province would maintain its opposition to Northern Gateway, and to Kinder Morgan’s proposed TransMountain expansion, until the projects can meet the five conditions the province set out in 2012. “The second and third conditions require ‘world-leading’ prevention and response plans if a pipeline fails on land or if oil is spilled into any rivers, lakes, or the ocean,” the Vancouver Sun reported earlier this year.

But Notley’s remarks still mean that “Enbridge Northern Gateway is back,” the National Observer warned in an e-blast to subscribers and supporters.

“If the deal goes through, it’s a revival of Harper’s legacy of approving a pipeline that 1,159 of 1,179 submissions were opposed to, including virtually every expert witness. It also means Site C Dam, billed as a clean power source for 450,000 homes, is a potential bargaining chip for the oil pipeline,” the news outlet warned.

“Northern Gateway would bring 225 oil tankers a year, some of which would go through Hecate Strait, which Environment Canada ranks as the fourth most dangerous body of water in the world. It would endanger the remote, protected Great Bear Rainforest region, which is crucial habitat for whales and salmon.”