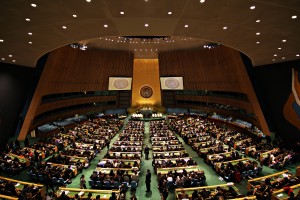 Prime Minister Justin Trudeau promised a ceaseless commitment on climate change and described the country’s Harper-era carbon reduction target as a “floor”, not a “ceiling” during an Earth Day ceremony in New York where he officially signed on to the Paris agreement.

“Today, with my signature, I give you our word that Canada’s efforts will not cease,” he said. “Climate change will test our intelligence, our compassion, and our will. But we are equal to that challenge.”

Trudeau promised to table the Paris agreement in Parliament next month for formal ratification later this year. He described the global increase in clean energy investment as “a trend that will continue to grow, and it’s one that represents a tremendous opportunity for Canada. One that we cannot—and will not—ignore.”

The PM also reaffirmed Canada’s commitment of $2.65 billion over five years for international climate finance. Developing countries “shouldn’t be punished for a problem they didn’t create, nor should they be deprived of opportunities for clean growth that developed nations are now pursuing,” he said. “We’re making these investments and we’re following through on our commitments because it’s the right thing to do.”

UN Secretary General Ban Ki-moon reminded participants that “we are in a race against time” on climate change, adding that “climate action is not a burden. Indeed, it offers many benefits. It can help us eradicate poverty, create green jobs, defeat hunger, prevent instability, and improve the lives of girls and women.”

In an email to CBC, Conservative environment and climate critic Ed Fast accused the government of “misleading” Canadians on the “true economic costs” of climate action. “Fighting climate change is serious business and Canadians need to be prepared to have a frank discussion about who pays for it,” he wrote. “Sadly, despite promises to announce a pan-Canadian framework on climate change within 90 days of the Paris climate change conference, Prime Minister Trudeau has failed to do so.”

In a report released last week, Parliamentary Budget Officer Jean-Denis Frechette said aggressive measures to meet Canada’s climate targets could reduce GDP growth by up to 3% and reduce the average Canadian income by $1,900 by 2030. “This should not be dismissed as trivial, but it would also not substantially alter the Canadian economy,” the report stated.

“To meet Canada’s international target of 30% reduction in GHGs by 2030, Canada will have to bring its emissions down by 208 million tons,” CBC reports. “This is equivalent to taking more than all the gasoline and diesel-powered cars and trucks in the country—including off-road vehicles—off the road.”

The PBO concluded that a carbon tax of up to $100 per tonne would be needed to drive down fossil fuel consumption and greenhouse gas emissions, adding that the Boundary Dam carbon capture and storage project in Saskatchewan cost the equivalent of about $57 per tonne.

“A number of sectors would potentially benefit from its ongoing development and deployment,” the report said of CCS, including electricity generation, cement, chemicals, and iron and steel. “Over the long term, it could account for a large share of emission reductions.”