Scientists Had to Recheck Data on Early Greenland Ice Melt 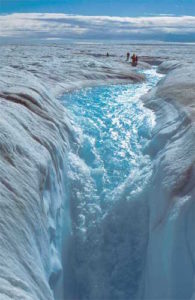 “We had to check that our models were still working properly,” said climate scientist Peter Langen of the Danish Meteorological Institute.

But “sure enough, thermometers on and around the ice showed temperatures as high as 64°F (17.8°C) on Monday—more than 35° warmer than normal for this time of year, and more typical of a warm day in July,” meteorologist and self-described climate nerd Eric Holthaus reports on Slate. Danish records for the Greenlandic coast dating back to 1873 confirm “that, at least in recent history, nothing like Monday’s warm spell has ever happened before.”

On Monday and Tuesday, 12% of the Greenlandic ice sheet showed surface melting, Langen told AP. “While the record early melt is mostly from natural weather on top of overall global warming, scientists say they are concerned about what it will mean when the melt season begins this summer,” the news agency reports. “This early melt, however, could be temporary.”

The World Meteorological Organization said the melt was “too much, too early,” and University of Colorado (UC) Climate Scientist Mike McFerrin put it more baldly. “Melt in Greenland, over this wide an area, this early in the season, is not supposed to happen,” he wrote.

“The Arctic is in crisis,” added Ted Scambos of UC’s National Snow and Ice Data Center at the. “Year by year, it’s slipping into a new state.”