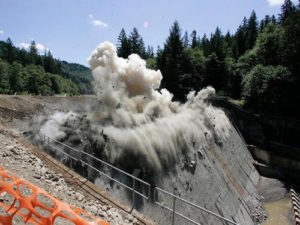 Stakeholders in Oregon and California have agreed to put fish ahead of hydropower—among other things—in order to demolish four dams, some a century old, on the Klamath River.

The river coils 423 kilometres from the desert highlands of eastern Oregon, through North America’s coastal mountains, to the northern California coast. “It’s been 115 years since the first of six dams began regulating flows on the Klamath,” EcoWatch reports. Blocked from upstream spawning beds by the barriers the hydro dams created, formerly rich salmon stocks were reduced to traces.

If multi-stranded agreements hold up among PacifiCorp, which operates the hydro dams at stake, and federal, state, and tribal governments, local farmers, and other stakeholders, “by 2020, most of them will be gone,” EcoWatch notes.

The agreement seals “the largest dam removal project in the history of our nation,” U.S. Interior Secretary Sally Jewell said last week in announcing the breakthrough. Ecologists hope it will lead to recovery for the river’s iconic salmon.