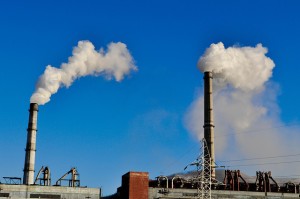 A rash of retirements of older coal-fired power plants and a surge in renewable electricity generation are behind a substantial drop in British greenhouse emissions in 2015.

“The closing of old, polluting coal-power stations and the rapid rise in renewable energy meant coal consumption fell by 22% [last year] compared to 2014, the biggest drop ever seen outside of miners’ strikes,” the Guardian reports. “Production of coal in the UK also fell to a new record low, dropping by 27% due to mines closing.”

Coal’s collapse in the cradle of the industrial revolution continues: four more British coal-fired power stations closed last month, and the government has pledged to retire the rest by 2025.

While coal continued its retreat, the Guardian notes, renewable generation grew by 29% last year, providing fully a quarter of all Britain’s electricity. Most came from wind power and bioenergy—the controversial burning of wood pellets, often imported from Canada or the United States. Solar power increased by 50% to make up 9% of all renewable electricity in 2015.

Oil production in the UK was also up, 13% higher than in 2014. Britain is the only G7 country that has increased fossil fuel subsidies, the paper reports.