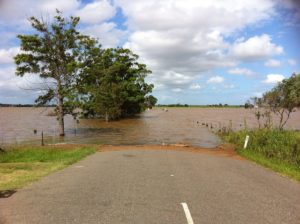 In a paper in the journal Atmospheric Chemistry and Physics, the research team concludes that ocean rise is better understood as exponential than linear. “Doubling times of 10, 20, or 40 years yield multi-meter sea level rise in about 50, 100, or 200 years,” the scientists write. “Recent ice melt doubling times are near the lower end of the range,” but the record is too short to conclude they will not accelerate.

The researchers combined paleo-climate and modern records with computer simulations to determine that the last time the planet’s average temperature reached those levels—about 1ºC warmer than today—“much of the polar ice disintegrated and the sea level rose 20 to 30 feet,” the New York Times reports.

Should it happen again, the researchers predict, “the likely consequences would include killer storms stronger than any in modern times, and a rise of the sea sufficient to begin drowning the world’s coastal cities before the end of this century.”

The group observed a paradoxical effect: the more sea surfaces cool in high polar latitudes, the more of the planet’s rising heat is captured beneath the surface, leading to underwater erosion of coastal ice shelves.

Cooling at the polar surfaces, in contrast to warming in the tropics, also creates steeper global gradients of atmospheric temperature—providing the energy to drive more violent storms, they note.

Without a rapid reduction in climate-altering emissions, Hansen warned, “we’re in danger of handing young people a situation that’s out of their control.” The levels of ocean rise projected I the study “would mean [the] loss of most of the world’s large cities and all their history,” perhaps within the lifetimes of today’s youngsters.

The group’s forecast drew criticism for being overly dark, even from some climate scientists. “Some of the claims in this paper are indeed extraordinary,” said Pennsylvania State University’s Michael Mann, who first developed the “hockey stick” graph to illustrate rapid 20th century warming. “They conflict with the mainstream understanding of climate change to the point where the standard of proof is quite high.”

Other scientists, the Times reports, “believe [Hansen] has opened himself to the charge that he is skewing his scientific research for political purposes.” Hansen’s politics have frequently courted controversy, as when he dismissed last December’s Paris climate accord as a “fraud.”

Nonetheless, other research released as recently as this month has suggested that rising oceans could displace as many as 13 million Americans by 2100.