Biofuel Blend to Power 150 United Flights Per Day from LAX 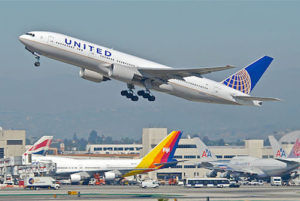 United Airlines converted its flights between Los Angeles and San Francisco to run on a 30% biofuel blend earlier this month, with plans to extend the conversion to all flights originating in L.A.

After the two-week trial period, “pretty much all flights out of LAX will have a component of biofuel,” Biofuels Digest reports, citing an official familiar with the United plan. The fuel conversion will eventually apply to 150 flights per day.

Under a contract signed in 2013, United will buy 15 million gallons of biofuel over three years from a Los Angeles refinery run by Paramount, California-based AltAir Fuels.

“This is a long-term investment toward the future of sustainability for our company and for our communities,” said United’s managing director of environmental affairs and sustainability, Angela Foster-Rice. “It’s also very business-smart and helps our community with clean energy jobs.”

The AltAir Fuels process uses technology developed by Honeywell UOP that can produce biofuel from a range of feedstocks, from cooking oil to algae. “The technology has been in the works since 2007, when the company was awarded a grant from DARPA [the U.S. Defense Advanced Research Projects Agency] to develop green jet fuel,” the Washington Post reports, citing a Honeywell official.

“Depending on the feedstock used, Honeywell Green Jet Fuel can offer a 65 to 85% reduction in greenhouse gas emissions compared with petroleum-based jet fuel, which helps refiners meet EPA mandates for renewable transportation fuel content,” Biofuels Digest notes. “It’s also being delivered at a price comparable to petroleum fuel, marking a major milestone towards the widespread use of renewables fuel.”

While biofuel production for cars “remains fraught with controversy,” the Post adds, renewable jet fuel “constitutes a relatively untapped opportunity.” And “while United may be first U.S.-based airline to launch regular biofuel-powered commercial flights, it will likely not be the last. Both Southwest Airlines and FedEx have reportedly contracted with a company called Red Rock Biofuels to start buying renewable jet fuel.”

The United announcement came days after Reuters reported that negotiators for developed and developing countries had “hit a roadblock over a plan to limit carbon emissions for aircraft,” during a meeting hosted by the International Civil Aviation Organization in Montreal. Last month, the Environmental Defense Fund warned that ICAO’s proposed new carbon efficiency standard would still leave a multi-billion-tonne gap between its emissions through 2040 and its stated environmental goals.