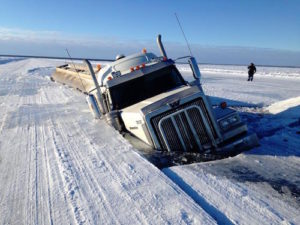 “Fossil fuels on thin ice” was the headline in Australia’s RenewEconomy e-newsletter earlier this week, after news agencies carried a photo of an oil tanker truck sinking through the Deline Ice Road across Great Bear Lake, in Canada’s Northwest Territories.

“Giant metaphor crashes through the ice in Canada’s North,” commented Cantech Letter, noting March 7 that the truck was submerged in the top portion of the ice, estimated to be 100 to 120 centimetres thick.

Days before, the territorial government had increased the weight limit on the road from 10 to 40 tonnes, a decision that founding editor Joe Romm second-guessed on the Climate Progress blog. “After the hottest winter on record,” he asked, “what could go wrong?”

The driver escaped the truck without injury, and NWT officials said there was no evidence of leaking oil around the vehicle.