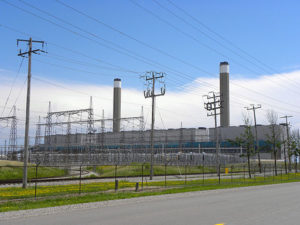 Ontario is repurposing the site of the Nanticoke generation station, North America’s largest coal-fired power plant until it shut down in 2013, as a 44-MW solar farm.

Ontario shuttered the plant, on the north shore of Lake Erie, as part of its historic coal phase-out. At its peak, the plant produced almost 4,000 megawatts of electricity. The new solar farm will generate barely more than 1% of that output, but it will be emissions-free, CleanTech Canada reports.

The project will be developed by Sun Edison Canadian Construction LP, Six Nations Development Corp., and Ontario Power Generation, and financed by a 15.67¢/kWh purchase agreement with the province’s Independent Electricity System Operator.

“This project is a great example of how countries are retiring coal plants and replacing them with clean, renewable power plants,” said SunEdison Vice-President Michelle Chislett, the company’s country manager for Canada.

“OPG is already Ontario’s largest renewable energy producer,” said President and CEO Jeff Lyash, and “this will be an important addition to our portfolio.”

While Ontario’s shift toward clean electricity has generated controversy over the province’s electricity rates, the coal phase-out has also been seen as major contributor to public health. “Prior to being idled, the Nanticoke Generating Station was Canada’s top polluter,” CleanTech Canada notes. “Ontario completed its coal phase-out in 2014, and the number of smog days in the province declined from 53 in 2005 to zero in 2015.”