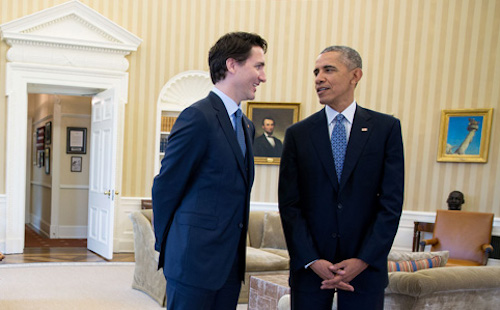 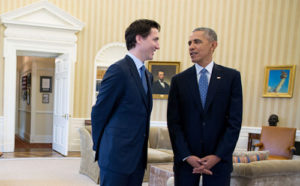 “About time, eh?” Obama wisecracked [2], referring to the first DC visit of this magnitude by a Canadian head of government in almost 20 years.

The joint statement [4] issued ahead of the two leaders’ meeting at the White House “commits the two countries to a range of actions to shore up the historic climate agreement reached in Paris last December,” The Guardian reports. “The two leaders committed to rally G20 countries behind the accord, promote North American carbon markets, cap emissions from hundreds of thousands of existing oil and gas wells, and protect Indigenous communities in a region which is warming beyond the point of no return.”

The most immediate takeaway from the visit is the two countries’ commitment to reduce methane emissions—from existing as well as new oil and gas facilities—by 40 to 45% from 2012 levels by 2025.

“Today’s announcement of a joint climate strategy between the U.S. and Canada moves the world a step closer to a future safe from climate change,” said Environmental Defense Fund President Fred Krupp, noting that methane accounts for about 25% of global warming. The U.S. is the world’s second-largest emitter of oil and gas methane, while Canada is the fourth-largest.

The Pembina Institute, which has been working on methane since the 1990s, described [5] the announcement as “a global climate win in the making” and “a breakthrough opportunity to tackle emissions in the oil and gas sector.” The U.S. Environmental Protection Agency will begin work immediately on methane regulations for existing oil and gas capacity, while Environment and Climate Change Canada will publish a proposed regulation early next year.

“We’re thrilled to see this commitment from Canada today, and we look forward to working with the government as they draft and implement those regulations,” writes Pembina Executive Director Ed Whittingham, noting that the bilateral announcement will now put pressure on Mexico to join in.

“If Mexico takes action on methane, the world’s second-, fourth-, and fifth-largest oil and gas methane emitters would be harmonized. Progress on this issue—perhaps at the Three Amigos summit in June—would ratchet up pressure on other fossil fuel-producing jurisdictions to follow suit, blazing the path to a global climate victory.”

The Globe and Mail coverage, however, points [6] to an inherent limitation in the timing of the official visit: “For the real state business, this moment in the sun came too early for the new Prime Minister, and a little too late for the outgoing President,” the paper notes. “Mr. Trudeau didn’t have a fully developed new agenda for U.S. relations, it seemed; Mr. Obama, anyway, has little time left to move on new agreements.”

On methane, “aligning targets makes sense—but Environmental Protection Agency administrator Gina McCarthy couldn’t guarantee U.S. regulations will be issued before the Obama administration leaves office,” a recognition that the president’s “ability to push through measures is winding down.”

The joint statement commits the U.S. and Canada to work together on “analytical methods for assessing and communicating the impact of direct and indirect GHG emissions of major projects, and of measures to reduce those emissions.” It indicates that “Canada and the U.S. will align approaches, reflecting the best available science for accounting for the broad costs to society of the GHG emissions that will be avoided by mitigation measures, including using similar values for the social cost of carbon and other GHGs for assessing the benefits of regulatory measures.”

It also lays out a “shared Arctic leadership model” that focuses on biodiversity, traditional knowledge, a sustainable economy, and strong communities north of 60°. “We confirm that for commercial activities in the Arctic—including shipping, fishing, and oil and gas exploration and development—we will set a world-class standard by basing development decisions and operations on scientific evidence,” Obama and Trudeau state. “Commercial activities will occur only when the highest safety and environmental standards are met, including national and global climate and environmental goals, and Indigenous rights and agreements.”