New Battery Design Could Pull Carbon Out of the Air 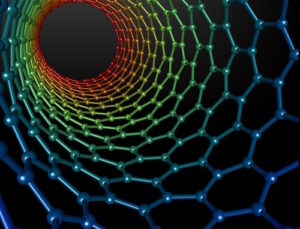 A research team at Vanderbilt University has come up with a new battery design that could pull carbon out of the atmosphere, turning electric cars into a carbon-negative option, according to a report in the online journal ACS Central Science.

“This approach not only produces better batteries, but it also establishes a value for carbon dioxide recovered from the atmosphere that is associated with the end-user battery cost, unlike most efforts to reuse CO2 that are aimed at low-valued fuels,” said Cary Pint, an assistant professor of mechanical engineering at Vanderbilt.

In what the university describes as an “unusual pairing of carbon dioxide conversion and advanced battery technology,” Pint worked with George Washington University chemistry professor Stuart Licht on a solar-powered process to convert carbon dioxide into nanotubes. “The nanotubes can be incorporated into both lithium-ion batteries like those used in electric vehicles and electronic devices, and low-cost sodium-ion batteries under development for large-scale applications, such as the electric grid,” Vanderbilt reports.

“Our climate change solution is twofold,” Licht said: “To transform carbon dioxide into valuable products, and to provide emission-free alternatives to today’s industrial and transportation fossil fuel processes.” Beyond batteries, he said the technique could deliver carbon composites for strong, lightweight construction materials, sports equipment, vehicle bodies, and airframes. (h/t to Environmental News Bits for pointing us to this story)