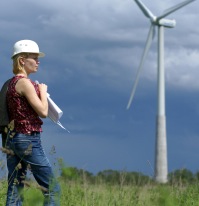 [1]Canada is moving toward a “pan-Canadian framework for clean growth and climate change that will meet or exceed [its] international emissions targets, and will transition our country to a stronger, more resilient, low-carbon economy—while also improving our quality of life,” First Ministers unanimously declared [2] at the end of their much-anticipated meeting in Vancouver March 3.

The communiqué at the end of the meeting included a federal commitment to invest in green infrastructure, transit, and energy-efficient social infrastructure, while working with provinces and territories to advance electric vehicle deployment and “lever federal investments in the Low Carbon Economy Fund to realize incremental emission reductions.”

Ottawa will also “foster dialogue and the development of regional plans for clean electricity transmission to reduce emissions,” help Indigenous and other remote communities replace costly, polluting diesel generators with renewable energy, and double its investment in clean energy research and development over the next five years.

“We know that a fair transition to a sustainable, low-carbon economy is necessary for our collective prosperity, competitiveness, health, and security,” the First Ministers stated. “Taking smart and effective action today is essential for future generations. These decisions will put Canada at the forefront of the global clean growth economy, and will create opportunities to diversify our economies, open up access to new markets, reduce emissions, and generate good paying, long-term jobs for Canadians.”

To flesh out the details of a pan-Canadian action plan, the First Ministers agreed to form working groups on cleantech innovation and jobs, carbon pricing, climate change mitigation, and adaptation and climate resilience. The working groups will report to ministers by October, in time for the results to be reflected in the 2017 budget.

At a late afternoon roundtable during the GLOBE environmental technology conference, moderator Allan Gregg of Earnscliffe Strategy Group asked four provincial premiers whether the meeting had moved Canada any farther ahead on climate.

Alberta Premier Rachel Notley said the meeting produced “clear consensus” on the need for action, and on the “fundamental principles” that would guide that action. More specifically, “there was a general consensus on the issue of pricing carbon,” and “there was nobody there trying to avoid doing anything.”

Ontario Premier Kathleen Wynne said premiers are looking to the working group process to come up with the “most efficient, cost-effective way to reduce our carbon footprint,” recognizing that “we’re not going to meet the targets that were agreed to in Paris” given Canada’s current emissions trajectory. After the working groups have reported, she added, premiers will “have another honest conversation about what we need to do more of.”

While there may have been no consensus before the meeting on carbon pricing as a part of the solution, Wynne said, “now there is.”

During the roundtable, Notley, Wynne, and Premiers Philippe Couillard of Quebec and Greg Selinger of Manitoba all stressed the importance of reinvesting carbon pricing revenues to build their provinces’ clean energy economies. Notley said Alberta’s current economic situation would mean moving the money quickly, rather than waiting to build up a provincial fund. Selinger said a revenue-neutral carbon tax may have been a valid policy option when British Columbia introduced it in 2008, but economic stimulus is now a must.

In the days leading up to the First Ministers’ meeting, a group of Canadian scientists issued an open letter [4] to Prime Minister Justin Trudeau, advising him not to direct federal infrastructure funds to fossil fuel development, while a group of 50 cleantech executives from British Columbia called for $1 billion in loan guarantees for capital costs, plus $1.25 billion in new incentives over the next five years through Sustainable Development Technology Canada.

The 28 scientists, members of Sustainable Canada Dialogues, noted that global oil markets have permanently changed, prices are unlikely to rise significantly, and it’s questionable whether the $120 billion already committed to pipeline and tar sands/oil sands development will ever be profitable.

The cleantech execs noted that Canada has been the world’s third-biggest loser in cleantech market share since 2008, falling from 14th to 19th place. During the GLOBE conference Thursday, participants heard that cleantech is the world’s fastest-growing sector, and the loss of market share had cost Canada $125 billion in economic activity.

“To invest in a strong cleantech industry is to invest in a diversified, innovative, knowledge-based economy,” the executives wrote. “The world will produce and consume more than $1 trillion of cleantech solutions. The only question is whether Canada will be a buyer or a seller.”