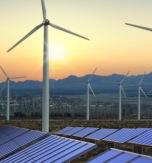 Investors poured a record US$329.3 billion into solar and wind last year, a 4% increase over 2014 at a time when photovoltaic costs are “tumbling” and large, offshore wind farms are beginning to receive financing, Bloomberg New Energy Finance reported last week.

“These figures are a stunning riposte to all those who expected clean energy investment to stall on falling oil and gas prices,” said Bloomberg LP founder Michael Liebreich. “They highlight the improving cost-competitiveness of solar and wind power.”

With 64 GW of wind and 57 GW of solar installed in 2015, the two technologies accounted for about 50% of new electricity generation around the world.

While major oil companies “eliminate jobs and curb capital spending to cope with prices that have fallen two-thirds in 18 months, renewables are enjoying a renaissance underpinned by rules designed to curb fossil fuel emissions damaging the atmosphere,” Shankleman writes. “Fears that low oil prices will continue into 2016 have knocked confidence among oil companies, delaying $380 billion worth of investment in upstream projects, according to analysis by industry consultant Wood Mackenzie Ltd.”

Bloomberg points to strong, sustained interest in renewable energy in China and India, with some uncertainty about offshore wind investment in the UK.

“Wind and solar power are now being adopted in many developing countries as a natural and substantial part of the generation mix,” Liebreich noted. “They can be produced more cheaply than often high wholesale power prices. They reduce a country’s exposure to expected fossil fuel prices. And above all, they can be built very quickly to meet unfulfilled demand for electricity.”