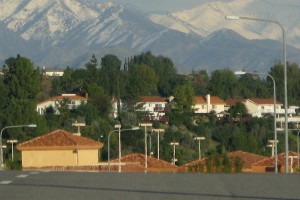 The United States’ worst-ever natural gas leak in a populated area is spewing nearly as much methane into the atmosphere each hour as the entire Barnett Shale, causing health effects in a neighbourhood about 20 miles from downtown Los Angeles and forcing 1,700 homes and the community’s two schools to evacuate.

The site is pumping 40 to 64 tons of methane per hour, for a total that had already exceeded 150 million tons in late December. The operator of the pressurized gas storage field, SoCal Gas, is promising “all possible efforts” to get the well under control, but its first six attempts to cap the leak failed. The company has now begun the three- to four-month process of drilling a relief well.

By comparison, the entire Barnett Shale releases about 65 tons of fugitive methane per hour, according to InsideClimate News. Yet as of Monday, the company was still pumping additional gas into the storage field. Methane is a shorter-lived greenhouse gas than carbon dioxide, but it is 25 times more potent by weight.

“The complex process of locating and plugging the underground leak has drawn comparisons to the 2010 Deepwater Horizon oil spill that continued for months in the Gulf of Mexico,” InsideClimate reports. The Washington Post identifies the facility as the largest of its kind on the U.S. west coast.

“This wasn’t a leak, it was a blowout,” said R. Rex Parris, one of several lawyers representing more than 1,000 residents of the Porter Ranch neighbourhood. “That whole well blew.”

The massive containment leak, first detected October 23, “is venting gas at a rate of up to 110,000 pounds per hour,” the Post reported December 26, citing California state officials. “The company’s losses in natural gas alone are estimated in the tens of millions of dollars, with total damages likely to exceed that figure many times over. A number of neighbours already have filed lawsuits, part of a growing outcry that includes calls for the company to close the facility altogether.”

The Aliso Canyon Leak “instantly became the biggest single source of methane emissions in all of California when it began,” Warrick writes. “The impact of greenhouse gases released since then, measured over a 20-year time frame, is the equivalent of emissions from six coal-fired power plants or seven million automobiles, environmentalists say.”

“But toxins such as hydrogen sulphide and benzene have been detected in the air,” she writes, citing Parris. “These chemicals can cause severe short-term and long-term problems, including cancer, but scientists know little about how these mixtures affect public health over a period of months. Parris said some residents have experienced more severe symptoms such as bleeding from the eyes and the gums.”

Earlier this week, the National Observer warned a similar leak could take place in Canada. “This can happen at a well site,” said Mark Brownstein, vice-president of climate and energy at the U.S. Environmental Defense Fund. “It can happen at a compressor station. It can happen with pressure relief valves along the pipeline, and as we’re seeing here, it can happen at geologic storage sites.”

“This is the kind of accident that can happen with natural gas, so the more we use, the more it could leak,” added Amy Townsend-Small, assistant professor of geology at the University of Cincinnati.

On Monday, the Los Angeles Times announced SoCal Gas was putting up 100-foot mesh screens to stop natural gas droplets from drifting into the Porter Ranch neighbourhood. A spokesperson said strong winds may have carried the mist to “properties immediately adjacent to the facility,” as attorneys for the families demanded a state emergency order to stop the company from injecting more gas into the storage field.

“Let there be no dispute about the impact this leak is having on the families in Porter Ranch,” the lawyers wrote. Thousands of families had to evacuate during this holiday season. The families in this community live here because it is supposed to be safe, and now it is not.”