A long-awaited study by the U.S. National Academies of Sciences, Engineering and Medicine has concluded that the United States is not prepared for a pipeline spill involving diluted bitumen from Canadian tar sands/oil sands facilities. 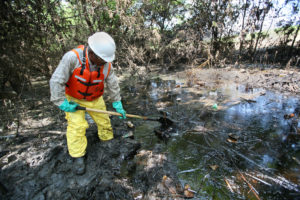 “The National Academy of Sciences is skewering the industry’s ‘oil is oil’ talking point—making it clear that diluted bitumen is a different beast altogether and needs to be treated as such,” said Anthony Swift, Director of NRDC’s Canada Project, whose testimony to the NAS traced the questionable methods some Canadian companies and regulators had used to categorize lighter crude as dilbit.

“The long-term risk associated with the weathered bitumen is the potential for that [oil] becoming submerged and sinking into water bodies where it gets into the sediments,” said study committee chair Diane McKnight of the University of Colorado Boulder. “And then those sediments can become resuspended and move further downstream and have consequences not only at the ecosystem level, but also in terms of water supply.”

The main message in the 144-page report “is that the thick type of oil called diluted bitumen, or ‘dilbit,’ initially behaves like conventional oil in the first few days following a spill but then quickly degrades, or weathers, into a substance so chemically and physically different that it defies standard spill responses,” InsideClimate News reports.

“The report recommends tailoring spill response plans by oil type, a stark contrast to the reassurances often uttered by energy companies that dilbit doesn’t need special regulations,” Hirji writes. “In recent years, the volume of dilbit coursing through American pipelines has increased steadily, from 250 million barrels in 2013 to 300 million barrels in 2014.”

The U.S. Department of Transportation commissioned the study in May 2014 following a Congressional request. It comes more than five years after a pipeline spill that dumped more a million gallons of dilbit into Michigan’s Kalamazoo River, fouled the water, affected surrounding lands and wildlife, displaced 150 families, cost at least US$1.2 billion to clean up, and triggered the news investigation that won InsideClimate a Pulitzer Prize.

ICN’s report on the NAS study points to the implications for first responders in a pipeline spill who don’t know what to expect with dilbit. “They are told it is crude,” not what kind of crude, said study author Merv Fingas.

“Here’s the rub: Once it becomes clear to responders that the oil at hand is dilbit—because it has visibly started to degrade—it is likely already too late to effectively clean it up,” Hirji writes.