Decision-makers looking for elements of a global solution to climate change should be wary of a “net zero emissions” option that “is no more credible than expecting carbon-sucking extra-terrestrials to do the job instead,” warned UK-based Biofuelwatch in a study published during the United Nations climate summit in Paris. 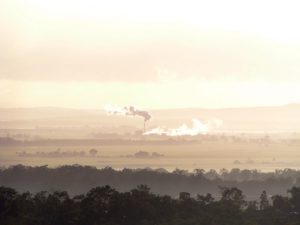 “Industry and even spokespersons of the Intergovernmental Panel on Climate Change (IPCC) are speaking about BECCS as if it was a savior technology, a climate quick-fix that will allow us to continue burning fossil fuels and still avoid catastrophic climate change in the future,” said co-author Almuth Ernsting. “Our report shows that BECCS is nothing more than smoke and mirrors.”

Yet most of the IPCC’s 2°C scenarios depend on BECCS combined with direct reductions in carbon emissions, the release warns. “Now campaigners fear that policy-makers will be tricked into thinking that so-called ‘negative emissions’ technologies can contribute to reducing global carbon emissions.”

The concept turns on several assumptions, all of which Biofuelwatch challenges in its report: That carbon emissions from biomass combustion could be buried underground, that large-scale bioenergy production can be carbon-neutral or low-carbon, and that the core CCS technologies are technically and economically viable. The report “shows that each of those assumptions is based on wishful thinking rather than solid evidence,” the release states.

“The only proven ways of removing carbon from the atmosphere involve working with nature, such as through agro-ecology and the regeneration of natural ecosystems,” said Campaigns Coordinator Mary-Lou Malig of the Global Forest Coalition. “Large-scale bioenergy can never be carbon-neutral because it relies on converting vast areas of land into industrial plantations and removing far more wood than healthy, biodiverse forests can support.”