Going through 6,000 pages of trade legalese—the contents of the draft Trans-Pacific Partnership (TPP) trade agreement released in October—is no easy task. The Sierra Club did it so we wouldn’t have to. Its bottom line: far from being the ‘21st century trade agreement’ that proponents claim, the TPP “poses a panoply of threats to our climate and environment.” 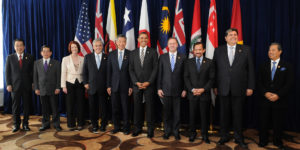 Like other trade agreements, the TPP would take certain disputes over a signatory state’s actions out of the hands of national courts and put them into the jurisdiction of international tribunals. Corporations may challenge states’ actions that violate international standards of fair treatment. They have often used these in the past to seek punitive amounts of compensation after governments instituted regulations in the public interest (although winning much less often).

The Sierra Club finds that the TPP leaves climate policies vulnerable to similar challenges, in which companies could “force governments to pay the hypothetical profit they would have earned,” if it were not for those policies. The group dismisses “safeguards” that the Office of the U.S. Trade Representative says will prevent such cases as “not new” and “far too weak.”

TPP rules on procurement would also ban both green labeling and government “green purchasing” practices, such as requiring that energy purchased comes from renewable generation.

Other elements in the TPP, Sierra finds, are designed to force the U.S. government to approve unlimited exports of liquefied natural gas (LNG), “a fossil fuel with high life-cycle greenhouse gas emissions,” to any member of the partnership. One of those is Japan, the world’s largest importer of LNG. Those terms, the group warns, will encourage the construction of gas delivery infrastructure—pipelines and ports—in the United States that will have the effect of “locking in the production of climate-disrupting fossil fuels for years to come.”