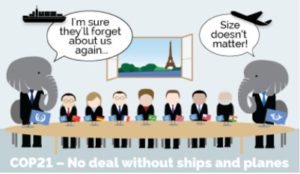 With airlines’ emissions set to increase 100 to 200% over 2000 levels by 2050, panelists and participants said it will be impossible to keep average global warming below 2ºC/3.6ºF without a far more immediate and ambitious carbon reduction effort than the industry has ever considered. They also cast air travel as an issue of global equity, since only 1.5 billion of the world’s seven billion inhabitants have ever had the privilege of stepping on a plane.

So-called “bunkers”, including airlines and international shipping, currently account for 3.2% of global emissions by a conservative estimate, said panelist Alice Bows-Larkin of the Tyndall Centre for Climate Change Research. But international aviation is on track for significant growth, leaving a “huge gap between CO2 from aviation and what needs to be done to avoid 2º.”

Airlines’ incremental efforts to boost engine efficiency, introduce lighter materials, and improve infrastructure on the ground won’t be enough to offset their necessary, long-term reliance on kerosene fuels, and panelists disagreed on the practicality of assigning a large share of available biofuel supplies to aviation.

“Mitigating all emissions in aviation in line with 2º requires demand management,” Bows-Larkin stressed, adding that efforts to mitigate airline’s impact through emissions trading will be too little, too late. “If we don’t get text in Paris around aviation and shipping, the assumption is that they can continue” with business as usual, “and it isn’t a given that technology will mitigate their emissions.”

Kassie Siegel of the Tucson, Arizona-based Center for Biological Diversity traced connections between the U.S. Environmental Protection Agency’s domestic rulemaking on airline emissions and the global standards that have been ever so slowly making their way through the International Civil Aviation Organization. (“You can’t spell ‘procrastination’ without ‘ICAO,’” the Flying Clean Alliance warned in October 2013, during the agency’s triennial assembly in Montreal.)

The EPA has the option of adopting the international standard or establishing more stringent rules, but has expressed serious concerns with ICAO’s proposed approach to emissions, Siegel said. It would only reach 5% of the international airline fleet by 2030; even the most ambitious option would exclude existing aircraft; it does nothing to push fleet-wide carbon reductions in the face of projected industry growth; its effective dates are far too late to contribute to rapid decarbonisation; and the underlying metric for the ICAO standard is flawed.

“This is of course an absolutely urgent, urgent issue,” she stressed, even though there’s much that airlines can do to cut their emissions immediately: A new ranking by the International Council on Clean Transportation points to a 51% performance gap between the least carbon- and fuel-efficient international airline, British Airlines, and the most efficient, Norwegian Air.

Andreas Hardeman of the International Air Transport Association said civil aviation carried more than 65 billion passengers in its first century, and will equal that total in the first 15 years of its second century. “If aviation were a state, it would be an emerging economy,” he said. “We are growing mostly because the global economy is growing, and the global economy is growing because we are.”

He said the flights that brought participants to the conference emitted half as much carbon on average as they would have in 1990, and estimated the industry has avoided 7.7 gigatonnes of emissions since that year.

The industry’s voluntary sectoral target—which Hardeman cast as “an early expression, almost, of our own INDCs within the sector”—calls for a 1.5% fuel efficiency improvement per year, stabilization of net emissions at 2020 levels through “carbon-neutral growth”, and a 50% emissions reduction from 2005 levels by 2050.

At the time of the 2009 IATA declaration, Assistant Director Quentin Browell acknowledged that the annual efficiency improvement would be more than outweighed by a 5% annual increase in air travel. That meant the industry was defining a compound annual increase in emissions of 3.5% leading to an output of almost 910 million tons per year in 2020 and more than a 50% emissions increase in just over a decade, as “carbon neutrality.”

Lucas Chancel, Coordinator of the World Inequality Report at the Paris School of Economics, called for a global tax on airline tickets to generate funds for climate adaptation finance and account for the fact that air travel—unlike other modes of transport—is not subject to national fuel taxes. He described that gap as “massive tax evasion” and a form of government subsidy for aviation and fossil fuels.