Money and Commitments, But Little Progress On Halting Deforestation

Germany, Norway, and the UK committed $5 billion on Nov. 30 to fight global deforestation. The initiative, led by the presidents of France and Peru, commits to intensify “efforts to protect forests, to significantly restore degraded forest, peat, and agricultural lands, and to promote low carbon rural development.” However new assessments called into question one of the initiative’s key parts: a similar declaration made a year ago by 52 of the world’s biggest companies. 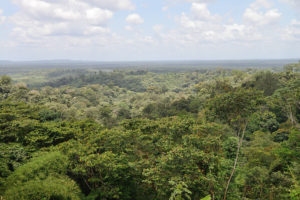 The announcement at the Paris World Climate Summit gives new momentum to plans under the so-called Lima-Paris Action Agenda, to promote the protection of 400 million ha of forests in conjunction with indigenous peoples; solicit zero deforestation commitments from commodity supply-chain operators; restore landscapes; and promote the 2014 New York Declaration on Forests.

The New York Declaration secured endorsements from indigenous and non-governmental groups, as well as such global corporations as Unilever, General Mills, and Walmart, for its goals of reducing the ongoing loss of global forests by 2020, and ending it entirely by 2030. Inside Climate News reports, however, that one new assessment finds the Declaration has made little progress, while another warns that as many as half the species in the Amazon basin may face extinction.

“We see pledges. We see programs. We see activity,” Charlotte Streck, director of Climate Focus, said in releasing the organization’s review of the Declaration’s first year. “It is not enough, however. We are not on track to end the loss of natural forests.” Meanwhile The Global Canopy Programme found that fewer than one in ten ‘powerbroker’ corporations have adopted policies to reduce deforestation in their supply chain—and fewer than one in one hundred leading agricultural lenders had done so.

Coincidentally, the Climate News Network cited scientists’ warnings that the Amazon could lose more than half of its estimated 15,000 tree species as a result of deforestation and climate change by mid-century. The Amazon forests have already lost 12% of their original extent. By 2050, they are expected to lose at least another 9%, and perhaps as much as 28% more. At least 36% of all its species are deemed to be at risk, and the portion may be as high as 57%—more than half.