Canada is coming closer to the $4 billion per year in international climate funding that campaigners see as the country’s fair share of the $100 billion per year promised by industrialized countries at the UN climate conference in Copenhagen in 2009. 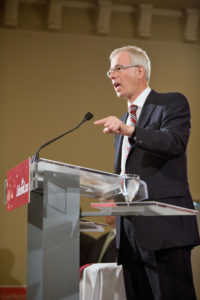 On the eve of the 2015 summit in Paris, Foreign Affairs Minister Stéphane Dion promised $2.65 billion over five years, peaking at $800 billion in 2020, the year the $100-billion Global Climate Fund was to be fully underwritten. “It’s much more than we ever did,” Dion said Friday, noting that the announcement more than doubled the Harper government’s previous commitment of $1.2 billion over five years.

“The money will go both to mitigate damage from climate change and fund emissions reduction projects in developing countries, notably in Africa and among Pacific islands,” the Globe reports, citing Dion’s announcement.

“Mr. Dion noted that that sum is supposed to be Canada’s contribution from both public and private sources, and that the $800 million Canada will contribute in 2020 will attract private ‘partners’ and generate a total of $4 billion,” Clark writes. “He did not specify by what mechanism such private funds would be attracted, or what incentives might be provided to generate private capital.”

Hours later, Environment and Climate Change Minister Catherine McKenna unveiled Canada’s eight priorities for the Paris climate talks. “The agreement should be durable and legally-binding, and it should accommodate different national circumstances and capabilities,” she told media.

“Everyone wants the United States to be part of this treaty,” she added, but “there are political realities in the United States.” So while national targets in a Paris deal won’t be legally binding, “we do support the fact that all parties have a legal obligation to submit a commitment under the agreement,” and to deliver updates every five years.

Canada’s other priorities (refreshingly published on the Environment and Climate Change Canada website) include keeping emissions in check, building a common commitment to “robust transparency and accountability,” putting climate change adaptation front and centre, promoting “cost-effectiveness and cooperation” through carbon markets, investing in a low-carbon future, and speeding up GHG reductions to achieve “early wins in the pre-2020 period”.