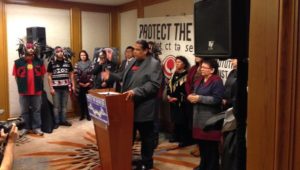 Now, the Tsleil-Waututh say the Harper government “failed in its constitutional legal duty to adequately consult with their community when it began the NEB review of Kinder Morgan’s proposed C$5.4-billion Edmonton-to-Burnaby pipeline expansion more than a year ago,” the National Observer reports. “The band believes the case will also add political pressure for the incoming Trudeau Liberals to act quickly on their election promise to overhaul the review of oil pipeline proposals.”

The case “is not going to stop Kinder Morgan, but it will slow it down,” said Chief Maureen Thomas. A Liberal spokesperson said the new government “will immediately review Canada’s environmental assessment processes and introduce new, fair processes. We will also modernize the NEB and end the practice of federal ministers interfering in the environmental assessment process.”