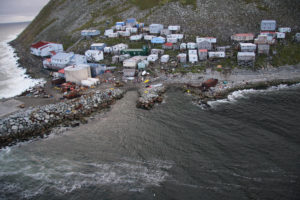 Alaska is encouraging rural and remote communities to shift to renewable electricity, at a time when some of them are devoting more than half of average household income to pay for home heating and electricity.

“Although many of these homes consume very little electricity, electric rates and fuel costs are high, and the cold climate means that lots of energy is required to heat even energy-efficient homes,” Renewable Energy World reports. “Numerous small and remote Alaskan communities run on stand-alone electric grids and rely heavily on diesel fuel generators. Because Alaska does not have a statewide highway system, fuel is barged from Seattle to regional distribution centres, then delivered locally by air or boat,” so that costs are high and communities must store eight to 13 months of fuel to avoid shortages.

Leon cites the City of Kodiak as a community that produced 40% of its energy from diesel until 2008, but now generates more than 99% from hydro and wind, with support from the Alaska Renewable Energy Fund. The community is home to 14,000 people, Alaska’s biggest fishing port. and the United States’ largest Coast Guard base.

“Displacing diesel fuel with renewable power has produced multiple benefits for Kodiak,” Leon writes. “The island has avoided use of 6.9 million gallons of diesel fuel at roughly $3.50 per gallon since 2009. Kodiak residents paid approximately 2.5% less for electricity in January 2015 than they did in January 2001, without any adjustments for inflation.”