Amnesty International has launched an investigation into the large number of missing and murdered Indigenous women in the British Columbia Interior town of Fort St. John, looking for evidence on the social impact of natural resource megaprojects on Indigenous communities. 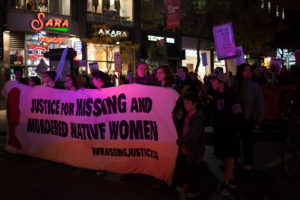 Amnesty representatives have visited the oil and gas boomtown twice, will be back again in November, and plan to publish their findings next spring.

“The investigation comes at a notable time,” the Globe and Mail reports. “Construction is under way on a massive work camp in northeastern British Columbia that, when completed, will house thousands of new workers coming to build the Site C [hydro] dam.”

Fort St. John resident Connie Greyeyes believes the study “will validate what is apparent to her as a long-time resident of the city: that huge influxes of transient workers have had a significant social impact on the community and increased the level of risk for women. She cited, as one example, rampant substance abuse by temporary workers,” the Globe reports.

“Thousands of workers are coming here … and here, they’re anonymous. They can do what they please until they get caught,” she said. “It’s such a worry for me to go out on the weekends because the bars are filled with transient workers that have a lot of money in their pockets, and when you have the dynamic of alcohol and drugs, it’s never a good mix for women.”

Amnesty’s Jackie Hansen says Fort St. John can fund infrastructure and services for its permanent population of 22,000, but the community can grow to 70,000 when oil and gas activity reaches a peak. The result is “a very critical lack of affordable housing” and limited staffing for hospitals and other services.