Canadian fisheries will be threatened by an increasingly acidic Pacific Ocean, and the country doesn’t know nearly enough about the impact of climate change on marine life, according to a draft Fisheries and Oceans Canada report obtained by Canadian Press under access to information laws. 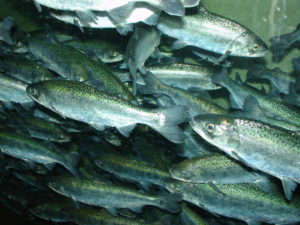 “Changes to the ocean’s carbon chemistry as a result of increased absorption of carbon dioxide are undisputed,” the report states. “These changes are likely to have negative effects on marine ecosystems and organisms that contribute significantly to the economy and ecology of the Pacific Region,” where “ocean acidification and its biological effects remain largely unmonitored and unstudied.”

The report, produced by the Pacific Ocean Working Group on Ocean Acidification, concludes that “further inaction will make it impossible for managers to deal with changes in fisheries for everything from oysters to salmon,” Weber writes. The authors conclude that a lack of federal response “may also lead to negative responses from industry, First Nations, and the public, with the possibility of litigation.”

Weber explains that “ocean acidification occurs when the seas absorb more carbon dioxide from the atmosphere than normal. As the level of the gas increases in the atmosphere, so does the sea’s acidity. Scientists estimate the surface of the open ocean is about 30% more acidic than it was a century ago,” and “shellfish farmers already find it difficult to get young oysters to grow as seawater pH levels drop.”