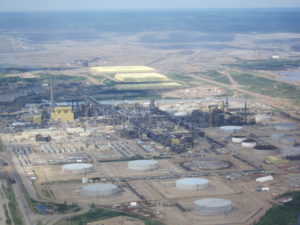 In anticipation of a Conservative Party loss in Canada’s federal election, at least one Calgary-based investment manager claimed he was in danger of losing his lunch.

“As of last Friday, my stomach is getting nauseous again,” Rafi Tahmazian said late last week.

“At a time when our economy in Alberta is the worst that I’ve ever seen in 25 years, I need a federal government focused on a strong and healthy economy to help rebuild the energy sector,” Tahmazian told CBC. “To keep our sector going the best it can.”

“It’s no secret the Liberals and the NDP have spoken out against the oil industry, and that riles some people here,” added analyst Dirk Lever.

CBC inventories the federal parties’ positions on key fossil fuel pipeline projects. “Liberal Leader Justin Trudeau has said that he supports Keystone XL, is opposed to Northern Gateway, has withheld judgment on Energy East, and gives a conditional yes on TransMountain, depending on community buy-in,” Johnson writes. “NDP Leader Tom Mulcair is opposed to Keystone XL and Northern Gateway and is looking for changes to the approval process before supporting the other two.”

Both the Liberals and the New Democrats are committed to reducing fossil fuel subsidies, though the Liberal platform only called for a 25% cut by 2020 and the NDP program had no specifics on timing.