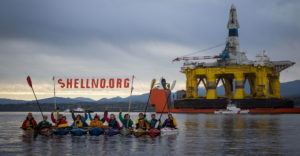 The Sierra Club declared victory over the weekend after the U.S. Department of the Interior cancelled all offshore drilling leases in the Arctic for the next two years.

The Bureau of Ocean Energy Management also refused requests from Shell and Statoil to extend their existing leases.

“This is your victory,” writes Dan Ritzman, Director of Sierra’s Arctic Program. “Every person who sent a letter, made a phone call, attended a rally in support of protecting the Arctic, and even took to the water to join other kayaktivists protesting Shell’s plan to drill, owns this win.”

Ritzman points to the opportunity for President Barack Obama to “further his climate legacy and keep more dirty fuels in the ground,” with another round of proposed leases for the Arctic and Atlantic Oceans coming up for 2017 to 2022. “We know drilling is dirty, dangerous, and must not be allowed to go forward,” he writes. “Let’s raise our voices together and tell President Obama to cancel the proposed leases for both coasts.”