The 824-megawatt Muskrat Falls hydro project in Newfoundland and Labrador is behind schedule and over budget, Canadian Press reported late last month. 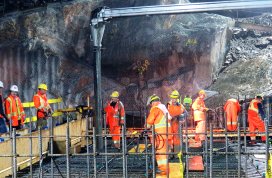 “Muskrat Falls was originally supposed to start generating electricity late in 2017 and it was previously forecast to cost C$6.99 billion,” CP writes. The provincial Crown corporation behind the project, Nalcor Energy, “attributes the increased cost of construction to market pressures and changes to the project,” but reports that work on the site has passed the half-way mark.

A provincial government report indicates the project has cleared the milestones where the likelihood of overruns was greatest. Remaining risks include weather, contractor reliability, and geotechnical conditions. “The performance of the civil contractor for the Muskrat Falls Generating Facility, while recently improved, remains an ongoing area of focus given the schedule slippage already incurred.”