Alaska Gov. Bill Walker thinks he’s come up with a foolproof solution for coping with the multiple, daunting impacts of climate change in his state, and across the circumpolar North: Generate revenue by drilling for more of the oil that caused the problem in the first place. 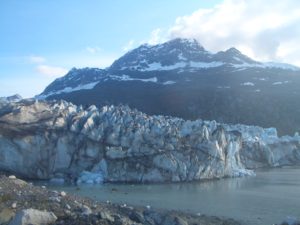 “We are in a significant fiscal challenge,” Walker told BBC. “We have villages that are washing away because of changes in the climate.”

The governor “says that coping with these changes is hugely expensive,” McGrath writes. So “he wants to ‘urgently’ drill in the protected lands of the Arctic National Wilderness Refuge to fund them.”

Royal Dutch Shell’s decision to abandon test drilling in the Chukchi Sea was bad news from Walker’s point of view, since declining conventional oil fields have brought the mammoth Trans Alaskan Pipeline down to 25% of its rated capacity of two million barrels per day.

“While Alaska’s income from the oil continues to fall, expenditure on climate-related activities is likely to go up,” BBC reports. “Coastal erosion is threatening a number of native communities in remote areas such as Kivalina,” where a surging sea took out a three-metre stretch of beach last week.

The estimated price tag for evacuating the town: US$100 million.

Walker recognizes that “this isn’t something we can put off for 10 or 20 years,” but environmentalists point out that going after more oil revenue is not the answer.

“What’s going on in the villages is certainly of concern to me as an Alaskan, but I think the governor knows there’s never going to be enough money to move everybody who needs to be moved as climate change continues to advance,” Lois Epstein of the Wilderness Society told McGrath.

“It’s really not something the state is going to take on on its own. The federal government is going to help, but we really need some bigger strategies to deal with climate change, both as a state and a nation.”