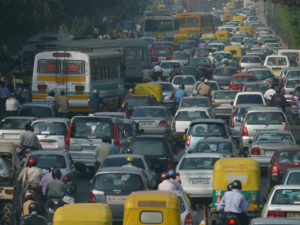 India committed to slow the increase in its carbon emissions and reiterated its promise to produce 40% of its electricity from renewable or nuclear energy by 2030 in the Intended Nationally Determined Contribution (INDC) it submitted to the UN climate secretariat last week.

The country’s embrace of renewable energy “will pave the way to sustainable economic growth that creates jobs, protects natural resources, and provides cleaner air and water for Indian citizens,” said NRDC President Rhea Suh. “India now has positioned itself as a global leader in clean energy, and is poised to play an active and influential role in the international climate negotiations this December.”

“It’s an aggressive, positive, solutionary, and balanced approach,” added Harjeet Singh of ActionAid. “It gives a lot of confidence to the world that there are a number of things they’re doing on the ground.”

Durwood Zaelke, President of the Institute for Governance & Sustainable Development, countered that “this is a very conservative approach,” noting that India is pushing against a growing global trend by falling short of an absolute emissions reduction.

“Although India’s per capita emissions are well below the global average, its population of 1.2 billion continues to grow rapidly and includes a burgeoning middle class,” InsideClimate reports. “Its emissions are projected to more than double by 2030 without any intervention. If India holds to its pledge, emissions would grow by about one and a half times.” Coal currently accounts for about 44% of the country’s energy.

The New York Times reports that India’s INDC foresees the country’s economy growing roughly seven-fold by 2030 from 2005 levels, while its carbon emissions triple. The plan adds up to a 33 to 35% decrease in the intensity of its fossil fuel emissions from a 2005 baseline.

India’s target “is not conditional on financial contributions from wealthier countries, a move that climate policy activists praised as a major step forward from India’s earlier positions,” the Times notes. But India estimates it will need US$2.5 trillion over the next 10 years to make the shift to a clean energy future and adapt to the impacts of climate change, according to InsideClimate.

The Times notes that statements by Prime Minister Narendra Modi and other elected officials have highlighted the tension in India between climate action and rapid economic development. “Poverty reduction is our top priority. Providing power in the next 2,000 days is our priority. We want faster development. My people have a right to grow,” said Environment Minister Prakash Javadekar.

But “climate change is also a priority. We have the world’s largest renewable energy sector. We want to clean our air, our water, our energy, our environment. It’s not because someone else is saying so. We want that.”

Just days before the announcement, Modi visited Silicon Valley, met with Tesla CEO Elon Musk to discuss the implications of the Powerwall battery for India, and toured Tesla headquarters in Palo Alto, California. “Thanks @elonmusk for showing me around at @TeslaMotors. Enjoyed discussion on how battery technology can help farmers,” Modi tweeted.