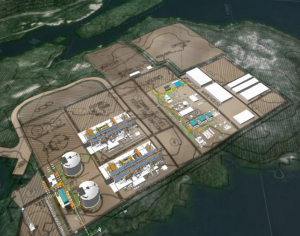 Individual First Nations in Canada are taking opposite positions in the fight over tar sands/oil sands and pipeline development, with Aboriginal leaders in Quebec, Ontario, and Manitoba looking to form a national anti-pipeline alliance while a group in northern British Columbia promotes a specific regional energy project.

Last week, a visiting delegation from the three central Canadian provinces “met in Vancouver with the Union of B.C. Indian Chiefs to press the case for fighting proposals, such as TransCanada Corporation’s Energy East pipeline venture,” the Globe and Mail reports.

“But a statement issued by a group of First Nations from northern British Columbia declared support for Eagle Spirit Energy Holdings Ltd., which envisages refining bitumen into finished products either in Alberta or northeast B.C., before piping them to the West Coast for export.”

The Globe points to “notable dissenting views” over the Eagle Spirit project—including the mayor of Lax Kw’alaams, the community that turned down a $1-billion offer from a liquefied natural gas project seeking access to its territory over a 40-year period.

“Eagle Spirit’s backers say they want to continue working with government and industry to study an ‘energy corridor’ that would allow oil and natural gas pipelines to go across northern British Columbia,” Jang writes. “By contrast, chiefs from Quebec, Ontario, and Manitoba are warning about the environmental risks posed by energy pipelines, especially any originating from Alberta’s oil sands.”

“All of these pipeline struggles across Canada are connected,” said Assembly of Manitoba Chiefs Grand Chief Derek Nepinak. “Even if the pipeline does not burst on your territory or contaminate your sacred waters—even if the pipeline is built on the other side of Canada—we will all suffer the climate change effects from increased tar sands production.”