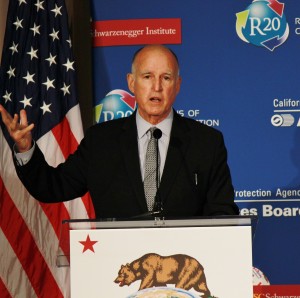 “We reached for something grand,” said Senate leader Kevin de León (D-Los Angeles). “But in the end, we could not cut through the multi-million-dollar smokescreen.”

The bill, SB 350, was defeated with several Assembly Democrats voting against it.

“Oil has won the skirmish. But they’ve lost the bigger battle,” Brown told a news conference. “We’re not going to miss a beat.”

The fuel efficiency measure faced a “fierce opposition campaign” from oil companies, featuring statewide television and radio advertising, the Los Angeles Times reports. “Supporters tried to salvage the measure by proposing some limits on state air regulators’ power and making the gasoline goal more flexible,” Megerian writes. “But Brown said the oil industry and its allies wanted more changes than he was willing to make, and it was too important to preserve the authority of the California Air Resources Board, one of the leading agencies involved in pollution policies.”

Kathryn Phillips of Sierra Club California said she was feeling “oddly encouraged” in spite of the setback. Until now, “I have not heard the governor be as strongly committed to protecting Californians from the effects of oil.”