One-fifth of the world’s countries will face severe water shortages by 2040, and many Middle Eastern nations will bear the brunt of the crisis, according to research published last month by the World Resources Institute. 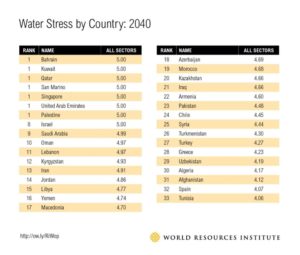 “The region, already arguably the least water-secure in the world, draws heavily upon groundwater and desalinated seawater, and faces exceptional water-related challenges for the foreseeable future,” WRI warned. The top three countries and eight of the top 10 on the Institute’s water stress list are in the Middle East.

VICE notes that “14 of the 33 countries most likely to suffer water shortfalls are in the region, including nine that are considered extremely susceptible.” That list includes Bahrain, Israel, Kuwait, Lebanon, Oman, Palestine, Qatar, Saudi Arabia, and the United Arab Emirates.

“Climate models tend to agree that in a warmer climate the water that is evaporating off the Equator is going to go higher up in the atmosphere and will travel further north and further south,” explained Charles Iceland, a director with WRI’s Food, Forests, and Water Programs. “So the places that get rains now are going to be passed by.”

These changes will occur as economies grow, per capita water use increases, and the global population is expected to continue its rapid increase.

“What stood out for me in this report was that a number of countries where we already see a high degree of geopolitical tension were the same countries that ranked very high in the future water stress ranking,” Iceland said.