Air pollution kills more than 4,000 people in China each day, contributing to 1.6 million deaths per year, according to a paper by the non-profit Berkeley Earth published last month in the journal Plos One.

“While the bad air in Beijing may get the most press coverage globally, the capital doesn’t have the worst air in China, and it isn’t the biggest source of air pollutants,” Quartz reports, “although the 10 worst cities in China are all found relatively close to Beijing.” 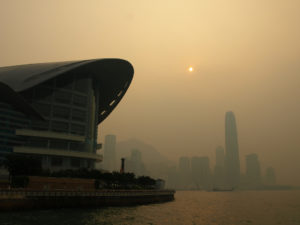 In their abstract, authors Robert Rohde and Richard Muller report on four months of hourly data on particulate matter, sulphur dioxide, nitrogen oxide, and ground-level ozone, collected at more than 1,500 sites. “During our analysis period, 92% of the population of China experienced >120 hours of unhealthy air (US EPA standard), and 38% experienced average concentrations that were unhealthy,” they write.

“Consistent with prior findings, the greatest pollution occurs in the east, but significant levels are widespread across northern and central China and are not limited to major cities or geologic basins. Sources of pollution are widespread, but are particularly intense in a northeast corridor that extends from near Shanghai to north of Beijing.”

Quartz points to coal as China’s biggest single source of air pollution, noting that “the government is trying to wean itself off this fuel source, and has taken some impressive steps toward doing so.” Electricity use fell 1.6% last year, even though the country’s GDP grew 7.4%, and coal use was down 8% for the first four months of this year compared to 2014.

“Some of that drop can be attributed to an economic slowdown in China, but economic activity is still rising overall,” Macauley writes. “That suggests a fall in coal use represents a real reduction in the country’s dependency on the fuel.”