The Middle East’s long relationship with its water supplies is the subject of a survey article that appeared earlier this month on New Statesman’s CityMetric site. 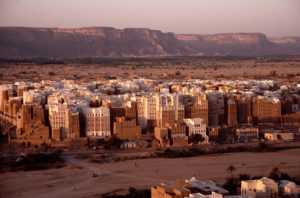 Different cities in the region developed because of proximity to water or land trade routes, or higher altitudes that resulted in more temperate climates. But “one factor remains constant in the development of all these cities,” writes Karim Elgendy, founder and coordinator of the Carboun Middle East cities initiative. “None of them would have been possible without access to fresh water, be that groundwater, surface water (rivers), or direct rainfall. The region’s cities are where they are because of water, not despite the lack of it.”

The article points to three major rivers—the Nile, the Tigris, and the Euphrates—that “each provided enough water for the cities on their banks to overcome occasional droughts, and have ensured continuous civilization since antiquity.” However, “with the exception of the cities along these three large rivers, water has remained a limited resource, and the region could only sustain a limited population size.”

When that population more than tripled, from 97 to 351 million, between 1960 and 2010, cities like Riyadh, Saudi Arabia turned to desalination to meet the demand. New oil wealth and rising population “may have justified a decision across the oil-rich region to use some the oil to ‘manufacture’ potable water,” Elgendy writes.

“It’s also possible to argue that it was desalination, and the availability of ‘easy water’, that made such population growth possible: that in turn created a need for more desalination. The result was a demand cycle that’s really hard to break.”