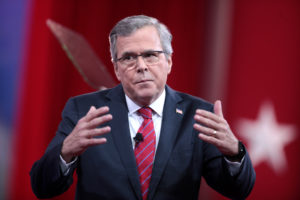 “I think we should phase out, through tax reform, the tax credits for wind, for solar, for the oil and gas sector, for all that stuff,” he said in New Hampshire, in a video recorded by 350 Action. “I think [the goal of] tax reform ought to be to lower the rate as far as you can and eliminate as many of these subsidies, all of the things that impede the ability for a dynamic way to get to where we need to get, which is low-cost energy that is respectful of the environment.”

Grist reports that renewables received US$15 billion in subsidies in 2013, according to U.S. Energy Information Administration data, against US$2.3 billion for oil and gas and US$1.1 billion for coal. But “the relatively recent clean energy subsidies are much more defensible than the oil tax breaks, which have been enshrined in the tax code for decades.” The article cites a key distinguishing feature from Andy Kroll, writing in Mother Jones last year. “The difference is that renewables are at the stage where oil was a century ago: a promising yet not fully developed technology that needs a government boost to come to scale.”