It’s time for California hipsters to stop taking showers if they want to keep eating beef, the satire duo The Yes Men suggests in its latest video. 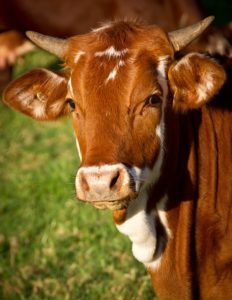 The video “highlights one of the main issues surrounding California’s record-breaking drought, one which hasn’t been getting much press: The water-intensive cattle industry. At any one time, there are more than five million cattle in California, and they use nearly half of the state’s water supply,” EcoWatch reports. “It takes 2,500 gallons of water to produce just a single pound of beef. A pound of wheat, by comparison, requires only 100 gallons to produce.”

The video covers the development of the fictitious Skip Showers for Beef Campaign, an industry effort “to basically encourage people to skip dozens and dozens of showers at a time in order to eat beef.” The voiceover suggests 40 days without washing for anyone who wants to eat four to six ounces of steak.

In one scene, two “hip L.A. people” discuss whether they’re doing the right thing by not showering, and whether the effort will make a difference. “I don’t think so,” one of them says, “but it makes me feel a bit better.”