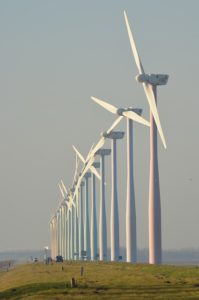 “Total installed renewable energy capacity is now 1,712 GW, up 8.5% from 2013,” Renewable Energy World reports. “This equates to around 27.7% of the total global generating capacity, enough to supply an estimated 22.8% of global electricity, with hydropower alone providing about 16.6%.”

IRENA echoes the International Energy Agency’s report last March that energy-related greenhouse gas emissions had decoupled from economic growth for the first time in 40 years. Emissions held steady in 2014, even though energy use grew 1.5% and global GDP expanded 3%.

“This encouraging trend is due to the remarkable success of renewables,” said Alexander Ochs, director of the Worldwatch Institute’s climate and energy program. “It should energize all efforts to make the important climate summit in Paris in the end of this year a success story, as well.”

REN 21 “concludes that in many countries renewables are broadly competitive with conventional energy sources,” Appleyard writes. “Indeed, in many nations renewables already contribute significant proportion of supply. For example, in 2014 wind power met 39.1% of electricity demand in Denmark, 27% in Portugal, and 21% in Nicaragua, while solar PV met an estimated 7.9% of electricity demand in Italy, 7.6% in Greece, and 7% in Germany.”