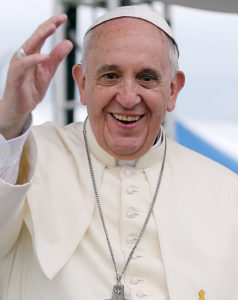 Sixty of the world’s mayors, including Vancouver’s Gregor Robertson, capped a two-day climate meeting with Pope Francis by signing a Vatican declaration that called for a “bold climate agreement” among national governments at the UN conference in Paris in December.

“Human-induced climate change is a scientific reality and its effective control is a moral imperative for humanity,” the mayors stated in a draft released yesterday by AP.

“The document calls for financial incentives to transition to low-carbon and renewable energy and to shift public financing away from the military to ‘urgent investments’ in sustainable development, with wealthy countries helping poorer ones,” AP reports. “And it says political leaders have a ‘special responsibility’ at the Paris talks to approve a ‘bold climate agreement that confines global warming to a limit safe for humanity, while protecting the poor and the vulnerable from ongoing climate change that gravely endangers their lives.’”