Solar energy systems in the United States produced 30.4 million megawatt-hours of electricity in the 12 months ending last March, 50% more than official estimates, according to an analysis by San Francisco-based kWh Analytics and the Solar Energy Industries Association (SEIA). 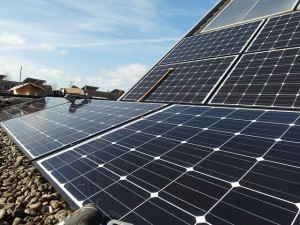 Based only on utility-scale solar installations larger than 1,000 kilowatts, the U.S. Energy Information Agency calculated only 20.2 million MWh for the same period.

Estimates by the EIA and the California Independent System Operator (CAISO) typically “miss a huge portion of solar generation” in their energy supply reporting, Kaminsky and Baca explain. “Solar electricity produced on the utility side (wholesale) of the meter is easily counted by these agencies. But they don’t count distributed generation—the smaller systems located on rooftops. Neither has much visibility on the generation coming from the nearly 700,000 customer-sited PV systems in the U.S.”

An SEIA study conducted jointly with GTM Research found that those distributed generators produce 9.2 gigawatts of DC power, about 45% of the solar capacity in the U.S.

The difference matters for major policy initiatives like the U.S. Clean Power Plan, which dramatically underestimates U.S. renewable energy potential through 2030. And when it comes to delivering clean energy, Kaminsky and Baca note, “every megawatt-hour counts. Every megawatt-hour from solar saves 172 gallons of water, displaces 1,500 pounds of CO2 emissions, and provides energy people can feel good about.”