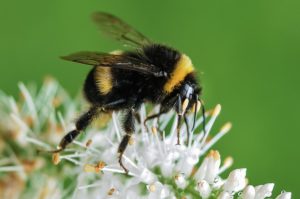 Climate change is rapidly wiping out bumblebee populations that can’t move north to cope with warmer temperatures, according to a paper published yesterday in the journal Science.

“The rates of loss are very rapid and are nearly the same across continents,” said lead author Jeremy Kerr, a biology professor and research chair in macroecology at the University of Ottawa. “We are essentially hitting them with everything we have in our global change arsenal.”

A research team from Canada, the United States, the United Kingdom, and Belgium analysed 423,000 observations of bumblebees from 67 species found in North America and Europe between 1901 and 2010. Over that time, temperatures in their habitats warmed by about 2.5ºC/4.5ºF.

“Since 1975, bee species have been squeezed north by about nine kilometres a year, and are now locally extinct in the southern 300 kilometres of their ranges,” CBC reports. “While the bees moved to cooler, higher elevations in some areas, they haven’t expanded north at all to compensate for their disappearance in the south. That came as a surprise to the researchers, as many other species such as butterflies, birds, fish, and other species are moving north rather quickly as the climate changes.”

Co-author Alana Pindar said the loss of bumblebees is a particular problem because they are more effective pollinators than honeybees and other wild bees. “They’re active for most of the year, from spring until fall, and can therefore pollinate a huge range of plants,” Chung explains. “Many other bee species typically only pollinate a few species of plants for a few weeks of the year.”