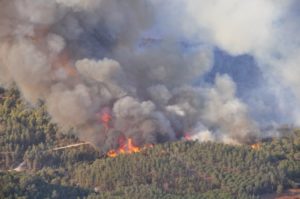 The fire season is starting off badly in the western United States, with 45 active wildfires from Alaska to Arizona bringing “far-reaching impacts on public health, water quality, and climate change,” ThinkProgress reports.

“These cascading impacts are the things that keep me up at night,” Jason Funk of the Union of Concerned Scientists’ Climate and Energy Program told ThinkProgress. “We haven’t been looking at them so much.”

Wildfires are “a completely natural occurrence that help a forest ecosystem with regeneration and growth,” Geiling writes. “But decades of fire suppression tactics combined with climate change have provided wildfires with an abundance of dry, dead fuel, leading to more fires and a longer fire season.

“Fighting wildfires also comes with a large price tag, with an average of $1.13 billion spent on wildfire suppression each year. With climate change, that price could increase to $62.5 billion annually by 2050.”

From “choking pollution that rivals Beijing,” to soil erosion, water contamination and resulting fisheries impacts, Geiling summarizes the long-term toll of increased wildfires. And fires in Alaska are worse, still, since about 85% of the state sits on permafrost that stores a large volume of carbon.

“As of Sunday, more than 300 wildfires were actively burning in Alaska,” she writes, “a fast start to the wildfire season that could foreshadow a larger trend. According to a new report by Climate Central, the number of wildfires in Alaska has increased dramatically over the past decade.”