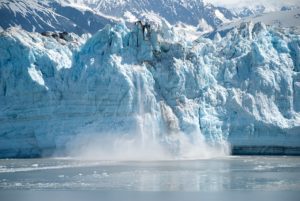 Record heat, wildfires, and glacier melt are major features of the “climate hell” Alaska has been going through, leading Salon.com correspondent Lindsay Abrams to conclude that “Alaska is on fire.”

The state’s fire crews are gearing up for an unusually hot, dry season, on the heels of a winter of below-average snowfall, Abrams reports. “Any associations you might have with Alaska being a generally chilly place, actually, were belied by last month’s heat wave: with average temperatures 7.1ºF above normal, the state had its hottest May in 91 years of record-keeping.”

Meteorologists attribute local conditions to changes in the jet stream, and “in the long term, the problem gets much scarier,” she writes. “Thanks to climate change, the state, with the rest of the Arctic, is currently heating up at twice the rate of lower latitudes, and its weather, as one state meteorologist, who was only sort of joking, put it, is ‘broken.’”

Earlier this month, University of Alaska at Fairbanks researchers reported that the state’s glaciers had lost 75 gigatons of ice (that’s 75 billion tons) per year between 1994 and 2013, concluding that “Alaska will continue to be a primary contributor to global [sea level rise] through the end of this century.”