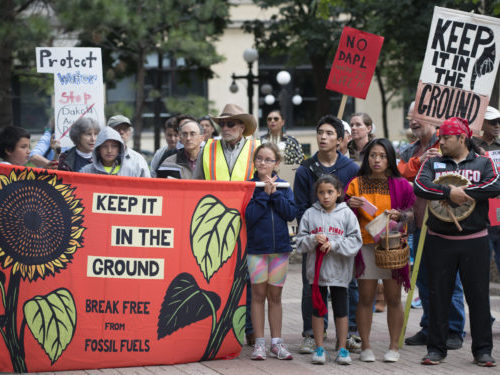 In the wake of last week’s visually exquisite [1] kayaktivist protest in Puget Sound, a pro-fossil Internet meme came up with, well, a rather innovative interpretation of the event.

It only took a few seconds for the community to push back.

“They came in automobiles fuelled by oil, wearing clothing made from oil, to protest oil, in kayaks made from oil. Then they tweeted their photos on phones made from oil and drove home. Share the irony,” wrote Mo L. Onlabe.

“Yes, we protest Shell Oil with products made from oil,” replied Seattle weekly The Stranger. “Duh. Now join us.”

“Let’s dispense with this pernicious meme, which we’ve been seeing across the social medias, real quick,” writes kayaktivist Ansel Herz. “Inanimate objects that come from our inescapable oil-based economy are inanimate. They can be used for good or bad. We’re using them for good, to move the economy away from oil and stop climate change.”

“Of course we do, and people in the North wore clothes made from cotton picked by slaves,” agreed Harvard historian Naomi Oreskes [3], in an interview with The Nation. “That did not make them hypocrites when they joined the abolition movement. It just meant they were also part of the slave economy, and they knew it. That’s why they acted to change the system, not just their clothes.”