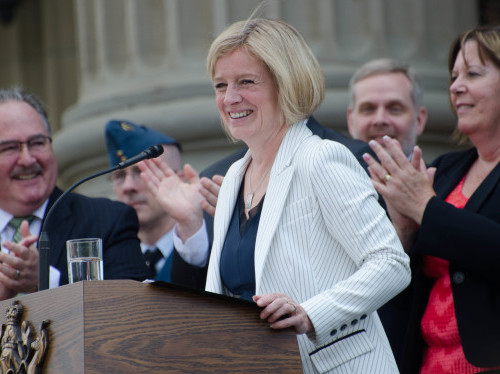 The May 5 election in Alberta may be the beginning of an “Alberta Spring,” with “opportunities as profound as the protest movements that rocked the Middle East after oil prices collapsed in 2008,” The Tyee’s Andrew Nikiforuk suggests in an iPolitics op ed this week.

But Premier-Designate Rachel Notley’s “merry band of fresh-faced democrats have inherited a government that, despite its much-lauded oil wealth, couldn’t balance a budget, let alone run an accountable health care system,” he writes. “The Alberta government suffers every ailment a petrostate can muster: a crippling addiction to hydrocarbon revenue, an eroded tax system, appalling statecraft and policy atrophy, binge spending, and minimal transparency.”

Nikiforuk suggests eight steps the Notley government will have to take to “restore democracy, rebuild accountability, and put the province on a more Scandinavian path,” a reference to Norway’s success in building a sovereign wealth fund on oil and gas revenues. The fund’s value now exceeds $700 billion [2].

“Notley has a difficult road to tread. But the path for reforming a petrostate is clear,” Nikiforuk writes. “She must restore accountability, rebuild public institutions, and reintroduce a representative taxation system. She must embrace more economic openness, and invest in human resources and greater transparency. Last but not least, Notley must also address the province’s glaring environmental deficits and pathetic record on climate change.”