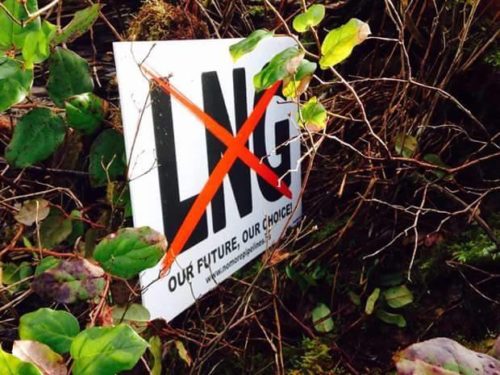 More than 180 eligible voters at a meeting of the Lax Kw’alaams First Nation unanimously rejected a $1.15-billion offer [1] from Malaysian-owned Petronas to consent to a massive liquefied natural gas (LNG) development in their territory.

“It was a proud moment for our people,” said Port Simpson, British Columbia resident Donnie Wesley, a lifelong fisherman. “We stood our ground.”

The vote was the first of three that will be required to decide the issue. “The remaining members of the 3,700-strong band will have an opportunity to vote following two information sessions in Prince Rupert and Vancouver over the coming week,” CBC reports.

Lax Kw’alaams Mayor Garry Reece said the band council would have no comment on the initial vote until members living outside Port Simpson had cast their ballots.

The votes are on a proposal by Pacific NorthWest LNG, a Petronas subsidiary, to build an LNG export terminal on Lelu Island, south of Prince Rupert. “Why would you build an LNG plant right at the mouth of the Skeena River?” asked Lax Kw’alaams member Malcolm Sampson. “Too much was at stake to wipe out a whole river.”

“It’s in the worst place they could have chosen on the whole north coast,” agreed Luanne Roth of the T. Buck Suzuki Foundation, noting that an area right off the island is a critical salmon habitat.

The deal with Petronas and the B.C. government “would provide 2,200 hectares of land in the Prince Rupert harbour area, worth about $108 million, and would promise jobs for qualified Tsimshian workers,” CP reports. “In exchange, Lelu Island and its traditional plants and medicines would be off limits to Lax Kw’alaams members. As many as 431 culturally modified trees could be destroyed if the deal goes ahead.”

According to information on the Lax Kw’alaams website, about 102 kilometres of pipeline on the seabed could have a negative impact on fish and their habitat, alter access to traditional fishing grounds, and contaminate seafood through dredging.