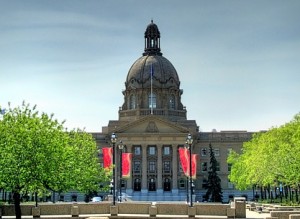 “I think we might have made a little bit of history tonight,” Notley said in her victory speech. “Change has finally come to Alberta.”

As The Energy Mix went to (virtual) press, the New Democrats held 53 seats in the province’s 87-seat legislature, with a caucus that included the largest number of women in Alberta history. The Wildrose Party, led by ex-federal MP Brian Jean, held 21 seats. The governing Progressive Conservatives were reduced to 11, including Calgary-Foothills, where Premier Jim Prentice said last night he would resign his seat.

“With this election, Albertans have voted for change — and that change includes improving Alberta’s environmental record and its approach to climate change,” said Ed Whittingham, executive director of the Edmonton-based Pembina Institute, in a release issued last night at 9:33 PM Mountain Time.

“We support the Alberta NDP’s commitments to invest in energy efficiency, and to phase out coal-fired electricity and replace it with cleaner sources,” he said. “We also applaud their commitment to take leadership on the issue of climate change—and that includes coming up with a credible plan to manage the growth in greenhouse gas pollution from the oilsands, and meet Alberta’s 2020 climate target.”

In an interview with the Calgary Herald late last month, Notley said she would support fossil fuel pipelines where there is a realistic chance of getting them built. She said she wouldn’t lobby for the Keystone XL pipeline, but didn’t necessarily oppose it. “What I’m opposed to is what’s going down under the current model, and the current model is what goes down the pipeline is jobs. Thousands and thousands of jobs are going to Texas.”

The Northern Gateway pipeline, she added, “is not the right decision. There’s just too much environmental sensitivity there, and there’s a genuine concern by the Indigenous communities. But I also think, from an environmental point of view, it’s a problem…It’s not going to go ahead. I think most people know that.”

Notley has expressed support for the Trans Mountain and Energy East pipelines.

In the lead-up to the election, observers warned that an NDP government would lead to capital flight from the province, with the Globe and Mail reporting the New Democrats “advocated a new review of the highly complex royalty regime to determine whether Albertans are getting acceptable rent on their resources. The Tories and Wildrose have promised no changes to the royalty structure.”

But on election night, analyst Stephen Carter, former chief of staff to ex-premier Alison Redford, downplayed the risk, saying Alberta had seen little or no new capital in recent months.