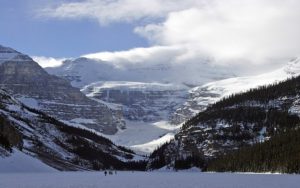 Alberta and British Columbia are set to lose 70% of their glacier volume by 2100, according to a new paper this week in the journal Nature Geoscience.

“Glaciers are melting rapidly around the world, including in Canada, and human-caused climate change is now considered to be the main driver,” CBC News reports. “Thousands of glaciers in B.C. and Alberta are expected to lose 60 to 80% of their combined volume compared to 2005, depending on how much CO2 gets added to the atmosphere between now and the end of the century.”

Except in the most optimistic warming scenarios, many glaciers in the Rocky Mountains will disappear completely, and “ice area and volume losses will exceed 90%” in the Interior and Rockies regions, the paper states.

“Previous studies mainly focused on the amount of snow that would replenish the glaciers each year and the net melting over time as the climate warms,” Chung writes. The latest research “goes into how glaciers will flow and break up, and where their water will go” under four of the IPCC’s latest climate scenarios.

“The details of how the glaciers will melt may also have an impact on hydroelectric production on glacier-fed rivers, as well as agriculture that relies on the water for irrigation, alpine tourism, and resource development, including forestry, the paper says.”